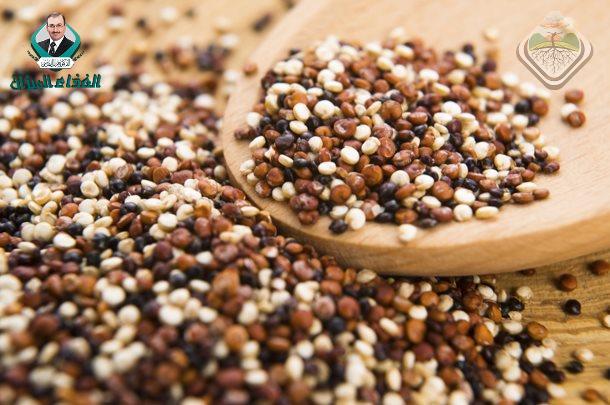 Dr. Kefah Waleed asked: Dear Dr. Jameel: My greeting and esteem for you. I want to ask your Excellency about Quinoa seeds as an alternative for wheat and barley, their benefits as a protein and about the availability of Quinoa in Jordan.

The answer: Dear respectable doctor: In spite of its similarity to grains in its shape yet it is in fact classified from the Pseudo-grains, as it is from the plant family of beet, spinach and others and does not belong to the known grains' family. (Repo-Carrasco-Valencia et.al., 2011)

Moreover, it does belong to the grains that were mentioned in ten positions in Holy Qur'an.

In fact the most important hallmark for grains, is what God (Glory to Him) described, grains are covered with mild rind that wind blows away "And grain having husks and scented plants." Surat Arrahman . In fact husked grains can include more than one meaning, from its meanings: the light rind of grains which the wind blows away. Other interpretations of this verse means that husked grains are what people acknowledged of grains from corn, oat, rye, wheat, barley, millet and others that people classify as grains.

In fact, if we study the composition of all grains and their accurate structural analysis, we will find that they are distinguished as a family that has a similar composition anatomically, functionally and nutritionally with the variation in the rate of elements and compounds and their quantities inside each type of the grains. This is what gives each kind of grains a unique distinguished benefit that makes it different from the other kinds of grains, though they are qualitatively similar in the contents.

Moreover, rinds of quinoa are characterized by a bitter taste and richness in glycosides, while these glycosides are not found in the rinds of grains such as the rinds of wheat and barley (Ma et.al., 1989) . On another side, quinoa's rind is poisonous for sparrows, this makes quinoa toxic, so birds avoid eating quinao seeds. Thus, quinoa is protected against birds and animals during planting it. (James, 2009)

In fact the generation of poisons inside the plants, particularly at the beginning of their growth and with the advance of their growth, is considered an amazing approach, in which plants utilizes in protecting themselves against dangers that might threat them during their growth. I will present a complete film about the plants, which generate the very poisonous cyanide during their growth, and how is cyanide works as protecting factor for these plants against animals that may eat it during growth, and about the gradual decrease of this cyanide in the plant parts during plant‘s development, growth and maturity.

In fact, beside the poisonous impact of the rind of quinoa on birds, it has a negative impact on the human as well (James, 2009) . Studies showed that it is corrosive for the respiratory system, the eye and the digestive system. It causes irritation in these systems upon entering the body(Schulz et.al., 2004) . Moreover, Studies indicated that the toxic glycoside material in the rind of quinoa caused hematolysis (dissolution of red blood cells when incubating these glycosides with red blood cells in laboratory) (Podolak et.al., 2010)  . Furthermore, this glycosides of the quinoa’s rinds is used as laundry cleaner and antibacterial especially for wounds that occur in the human's skin.

Therefore quinoa's rinds are harmful, not edible, and poisonous to human if eaten, in contrast to all known grains rinds that were defined in Quran as “husked Grain”.

Scientific studies proved that the benefits of grains such as wheat, barley, oat and corn exist in their rind much more than in their pulp. This is one of the aspects that have been referred to among the wonders of the holy Quran, centuries before the discovery of laboratory analytical techniques and test. This is the second aspect that differentiate grains from quinoa, where the rinds of all known grain is useful and healthy, but the rind of quinoa is toxic and poisonous to human.

The fourth important difference, in this comparison between the known husked grains and the quinoa, that quinoa kernel is gluten-free and lactose-free. Therefore, quinoa kernels are prescribed for those who suffer from lactose intolerance and gluten-intolerance. Because these symptoms are found in human who do not have sufficient enzymes in their bodies to digest gluten and milk products. (Alvarez-Jubete et.al., 2010) . Thus, the undigested gluten, in these people, might trigger allergic reactions, appears in symptoms such as diarrhea, malabsorption, skin allergy, or even as failure of growth for young children.

Therefore, in the Balanced Nutrition regime, we classify the kernel of quinoa as good nutritional source, but it is not more important than grains even not equal them in the nutritional value .Therefore it was classified as “Pseudo-grain”. (Repo-Carrasco et.al., 2003) , So it is not of the same nutritional quality of the grains that were mentioned in the verses of holy Qur'an.

In the Balanced Nutritional System, we see that quinoa can be used as an alternative for grains only in exceptional cases and not in all cases.

However, I explained in details in a chapter of my published book about “wheat and barley” how do the Qur'anic verses refer in many ways to the importance of all grains, their superiority and highness above all foods, and this is not limited to quinoa. This was explained in details and declared in several way from Quran verses.