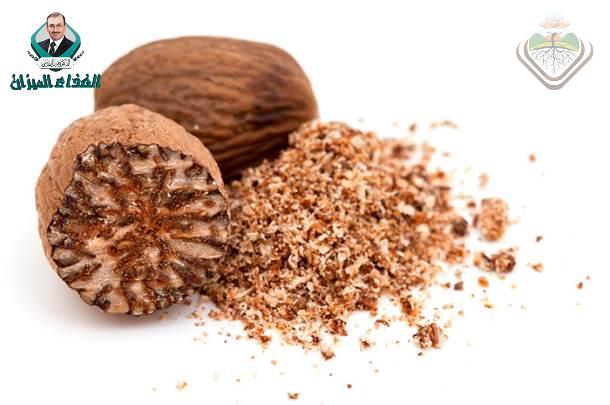 I would like to ask about nutmeg and its origin?

Is using it in food considered HARAM (forbidden)? Due to its narcotic or intoxicating substances?

Anciently, nutmeg was used in food as abortifacient drug, especially in the nineteenth century (Dasgupta, 2011) . However, nowadays, it doesn't have any medical use, although some active substances were successfully extracted from nutmeg. These substances were reported to have antibacterial effect especially on Streptococcus mutans, which is a popular bacterium that causes tooth decay and dental plaque (Chung et.al., 2006)  . Nutmeg was used to inhibit some kinds of cancer cells known in blood cancer (Piaru et.al., 2012) .

Nutmeg was known as psychologically effective substance if it’s taken in a high-dose, but it has no effect if it’s taken as a low-dose (Aronson, 2009) . The psychologically-effective material is a term that means every chemical substance that has the ability to pass the vascular-brain barriers, then access to the neurons and cause an impact whether on mood, sensation, awareness, cognition or behavior (Rankovic et.al., 2012)  . Nutmeg causes such kind of these effects and excessive use of it causes a sense of excitement, confusion, headaches, nausea, dizziness, memory disorders, visual hallucinations and greatness (Hanson et.al., 2014)  . It is something like the symptoms of having alcohol and wine. This effect may last for several days, that means last a period that is longer than the effect of having alcohol itself (Tisserand et.al., 2013) .

As I got the Islamic ruling as legitimate judgement) for using nutmeg from Saaid Al-Fawaid www.saaid.net:

Some of contemporaries reported that nutmeg contains a fatty yellowish substance which is known as Al-Teeb fat that consists 4% of narcotic substance. If nutmeg used in large quantities or used randomly, it would cause some harms such as hallucination, as the Saudi government prevented selling it due to its big damages (Al-Hamad)  .

Advanced scientists have two opinions about how to use it based on what they learned about its components and damages. Scientists unanimously agreed that it is Haram (forbidden). As Ibn Hajar has been asked about nutmeg, he said what the diligent Imam Ibn Daqeeq Al-Eid said, “it is intoxicant and acts like anesthetic. If Hanafi School said: “it is intoxicant, then they are imposed on what they said”. It has been proven that the four Imams (Shafi'i, Maliki and Hanbali) said it is textually forbidden. On the other hand, Hanafi said it is either intoxicant or narcotic when necessary (Al-Hamad)  .

So I hope I could convey the scientific and jurisprudence reports according to the experts in these field about the limitations of using nutmeg.