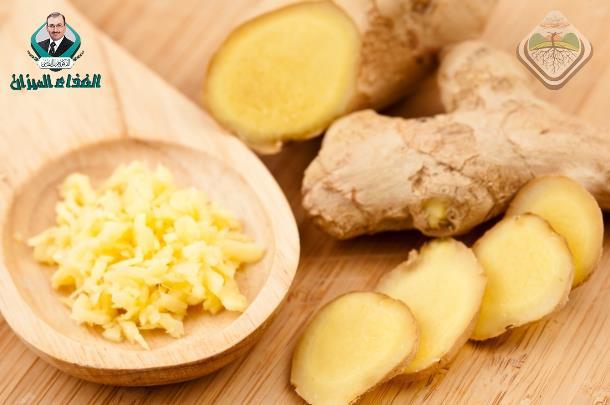 Get acquainted with the best method for Ginger's preparation

I personally believe, after my long study for the fundamentals of the Quranic nutrition science, that the ideal method for ginger's preparation was mentioned in the Holy Quran. If one meditates the verses in which ginger was mentioned and the subsequent, he will notice that it was mentioned as a beverage in the text, and after the mention of water of springs "And they are given to drink in it a glass whose mixture is ginger (17) a spring therein is called Salsabil (fresh cool water) (18) Surat Al-Insan

The scientists who explained the Holy Quran said that there are several meanings for the explanation of this verse, from them is the glass intended in the verse is a glass of wine, and the wine of the Resurrection Day does not intoxicate, and it is mixed with ginger. From these explanations is that the spring itself is called the spring of ginger mixed with the water of the spring and this is what Alqortobi explained

From the explained meanings of these two verses is that ginger is mixed with the water of the spring, which runs driven to where the people of Paradise are, in the form of Salsabila, In fact, if we look at the later meaning of this illustration i.e. the ginger mixed with the water of springs, this will make us stop at a medical meaning related to herbal extraction by water in Herbal medicine. We know from springs in the earth created by God (Glory to Him) that springs' water could be either cold or hot. The water of Feejeh spring near Barada stream in Syria for example, is extremely cold like snow even in the hottest days. In contrast, As-Ma’in Hot Spring in Jordan is a spring of hot water, but we know also through our observation for the hot springs, that their water even if it was hot, its heat does not reach to the boiling degree. In fact, if we think about soaking ginger with cold water or hot water, that does not reach to the boiling point, this will remind us with the scientific ideal method for extracting herbs, which forbids boiling them. They should be extracted with water of normal temperature, otherwise heat will negatively affect the water-soluble contents of active substances in that herb. A study indicate that water soluble –active-substances in can lose their activity at high temperatures ((Gladstar, 2012)

From here, soaking herbs in cold or warm water like the springs' water is considered ideal for extracting the active materials found in ginger. Keeping them in stable structures, unchanged and active.

Therefore, we see that the best scientific method is the one that is near to our understanding to these two verses. Therefore, for preparing the ginger well, we recommend to take a large spoon of minced or finely grated green ginger then to be put in a thermos that preserves temperature and after that adding a liter of cold water. The thermos must be promptly covered and this mixture is soaked for between 12 and 24 hours then drinking it cold after that or in the room's temperature degree.

In the case of quick preparation of ginger drink, a quantity of tablespoon of minced or fine grated green ginger is put in a heat preserving thermos and a liter of warm water (lower than 50°C) is added onto it, then the preserving temperature thermos is closed promptly, half an hour later you can drink it. Furthermore, we recommend drinking ginger once a day and usually after lunch and after the prayers of afternoon. That's why one liter is sufficient for all the members of the family, (Watson et.al., 2012) , but in case of an inflammation in the upper respiratory tracts or in case of using ginger therapeutically and not only preventative, (Brandon, 2015)   one can take from this ginger extract a volume of 100 ml in a small teacup once every 4 hours, this amount must be used for one day only and the next day another amount can be prepared.

The dry ginger can be used as alternative if the green fresh ginger is not available. For preparing ginger drink from dried-ginger a teaspoon of ginger-powder is prepared as previously mentioned. Here it is preferred that the dry ginger is grounded shortly before soaking in water, in order to increase the dissolving surface area of soaked ginger by grinding and we do not lose its volatile materials when it left for a long period before soaking.

Therefore we were careful in the Balanced Nutrition System to extract both water-soluble and oil-soluble contents, without excluding any of its elements. We preserve water-soluble contents of aqueous extract, in the natural apple vinegar of the best wonderful quality and accordingly we have ginger's vinegar, while we preserve the oil-soluble content of oil extract it in the excellent virgin olive oil squeezed on the cold at the first press. Consequently we produce the ginger's oil. By this method we obtain it balanced with all its elements in realization for a basic principle in the Balanced Nutrition System that was mentioned by the Holy Quran which is the complementation of the herb with all its elements and complete balance.

"And the Earth we spread and placed in it firm mountains and grew in it of every balanced thing" (19) Surat Al-Hijr. (Quran)
Note: it is not recommended to high amounts of ginger. It is recommended to have one or two cups a day, especially at afternoon or in the evening. Patients who take anticoagulant-medicines, especially medicines that work on the blood platelets, should ask their physicians, because of the anti-coagulation effect of ginger that prevents blood platelets' adhesion. People who have allergy towards ginger are not recommended to have ginger at all. They should follow the famous rule "Warding off evil takes precedence over bringing benefits".
(Bone, 2003)
Your brother Dr. Jameel Alqudsi