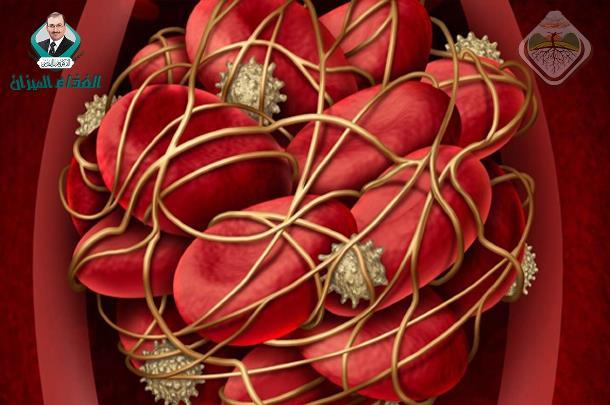 Are you suffering from arteriosclerosis disorder in your heart or brain? Do you know how the stroke and heart attack occur ? Did you do your best to help yourself to get rid of this multi-cause problem ?  Have you ever wished for a natural food that can help you to get rid of arteriosclerosis, saves your life and keep you beside your family and friends whom you love ?

One of the Quranic nutrition science's principles is to understand the disease, its causes and mechanisms so that you can treat every cause and mechanism perfectly and then recovery occurs by the will of God, "every malady has a remedy, if the remedy is available, the patient will recover by the will of God. Sahih (Muslim).

In fact, treating only the symptoms by expanding arteries is not considered a radical and an ideal solution, but it is a remedy for the symptoms regardless of causes, and in order to achieve a big success in improving the disease symptoms and prevent its progress, we should firstly know what is meant by arteriosclerosis so we can know how to treat it.

Arteriosclerosis occurs when the wall of the arteries becomes thickened and hardened, instead of being elastic and allows a big quantity of blood flows through it, it become narrowed and hardened and passes a smaller amount of blood, and this in turn, leads to a serious risk which is reduction in the amount of oxygen and nutrients that support  the body organs through these arteries, as the risk will be greater if these organs were strategic and important such as brain and heart. (Hirai et.al., 1989)  (Ku, 1997) , (Laurent et.al., 2006)

In fact, the presence of other factors such as high blood pressure in the arteries, diabetes, high cholesterol and smoking contribute to increasing the hardening of arteries and occurs of what is known as "atheroma", which is an advanced case of atherosclerosis in which a deposition of fatty layers and many other materials including inflammatory substances on the wall of artery which reduce the artery diameter and slows the flow of blood causing the symptoms of angina pectoris when making any effort. (Kass, 2005) , (Salonen et.al., 1988) , (Howard et.al., 1998)  , (Chambless et.al., 2002) , (Ross 1999) , (Maseri et.al., 1983) .

So the rate of blood and oxygen carried through the artery to the heart is less than the natural rate, and this in turn will lead to anaerobic respiration of the heart muscle cells (with oxygen deficiency carried by blood)

That leads to generating fewer energy particles needed for heart function (2 molecules of ATP  instead of  19 ATP molecules) and generating acids resulting from burning of glucose in the absence of oxygen such as lactic acid and butter acid. (Neely, 1974) .

That leads to alert these acids to the ends of nerves causing the known angina pain - the sever compressing pain in the chest which increases when making an effort and disappears when having a rest. (Wilke et.al., 1999) . (Sylvén, 1993) .

And atheroma that is deposited inside the wall of artery causes roughness in its internal soft surface which causes adhesion of blood platelets which adhere on the wall of artery when it reaches to any rough surface, and this in turn, will predispose to assemble the blood platelets that are surrounded by secreted proteins of the liver causing a completely blocked artery or what is known by the clot. (Fuster et.al., 1992)  , (Badimon et.al., 1993) .

Hence, the role of the stunning natural materials collection will help get ride of this disorder, which will operate normally, as omega-3 will be at the top of it, It is distinguished from all other types of materials in terms that it carries the quality of the balanced nutritional system.

As omega-3 also plays a role in reducing the blood fat, especially triglycerides which benefits the arteries of the heart, as studies suggest that "ischemic heart disease" is associated with an increased incidence of heart rhythm disorder and cardiac arrhythmia which in most cases would be deadly, and hence, the role of omega-3 is important. (Lavie et.al., 2009) .

In its great counter-effect for heart rhythm disorder and reduces the heart rate at the time of accelerometer. (Lavie et.al., 2009) , (Harris et.al., 2008) . However, olive leaves have a strategic role in preventing atherosclerosis by removing its three serious causes, as they contribute to the reduction of arterial blood pressure. (Khayyal et.al., 2002)  , they also have a great role in reducing diabetes (Wainstein et.al., 2012)  and an important role to help treating atherosclerosis (Wang et.al., 2008) .

Colostrum has been found that colostrum prevents the damage of tissues that occurs after the clot and ischemia that is followed by re-perfusion injury, as it has been proven in bowel ischemia as well as the brain. (Choi et.al., 2008) .

And we use it in cases of heart clot as, colostrum also has a superb ability to rebuild the damaged tissues after blood clot in the heart and brain in a way that is not only related to nutrition, but also it is rich of the growth factors (Burrin et.al., 1997) .

We recommend using colostrum for the patients with atherosclerosis for its great role in reducing cholesterol and triacylglycerol levels, and also in improving diabetic ranges and ketone bodies. All these are considered as risk factors of atherosclerosis. (Kim et.al., 2009) .

Grape seed, we recommend them due to their multi-talent effects,  we believe that God mentioned their fruits in the holy Qur'an